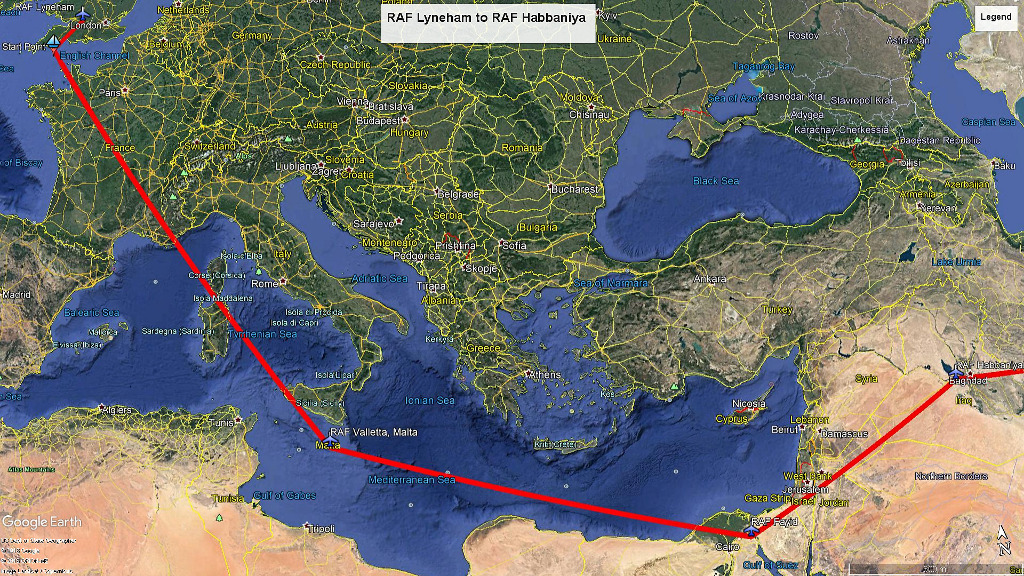 I left R.A.F. Lyneham by Hastings transport aircraft at 0800 hrs on Friday 16th June 1950, leaving the U.K.  shores at 'Start Point', between Salcombe and Dartmouth in Devon, for Malta. Half an hour into the flight we developed engine trouble and returned to Lyneham.

On Saturday 17th June we flew to Fayid (5 hrs 50 mins) and after lunch proceeded to Habbaniya Iraq  (3hrs 45 mins). and due to more engine trouble stayed there for a few days. 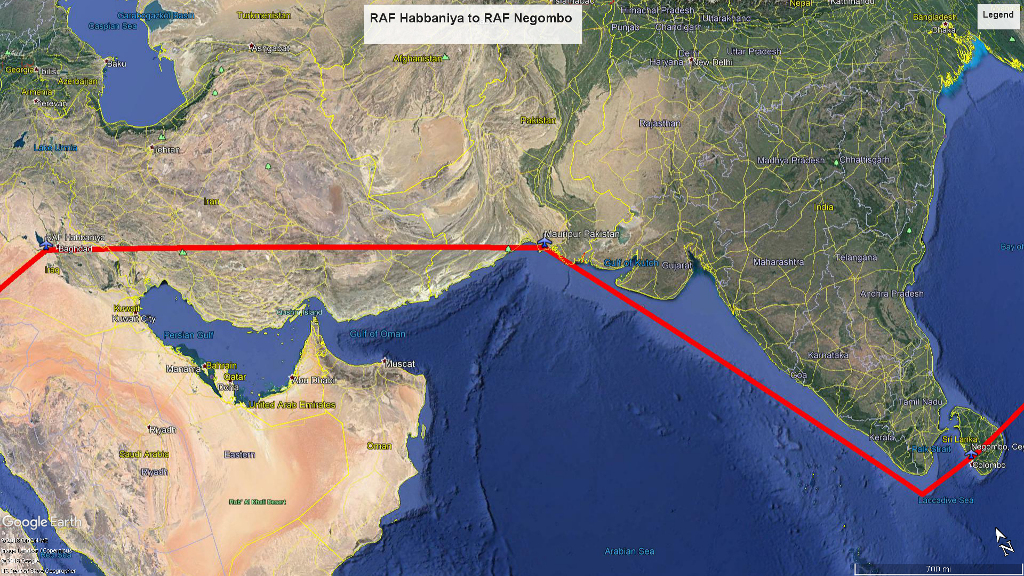 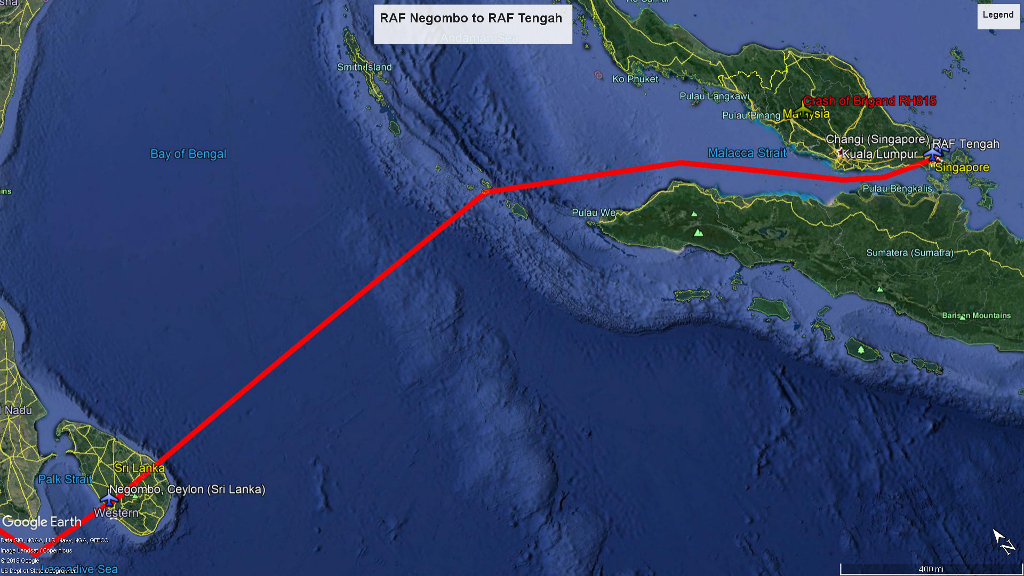 On Thursday 22nd June we flew to Changi (Singapore) 7hrs 35 mins.  A total of five flying days and 37 hrs 20 minutes to get from England to Singapore, so different from today.  I spent the night in the Aircrew Mess at R.A.F. Changi testing out the strength of the 'Tiger Beer' - slept well!

The following day, Friday 23rd June 1950, I got a lift in a Dakota flying across to R.A.F. Tengah (87 miles north of the equator), meeting my fellow members of 84 Sqdn., and being introduced to my C.O. Sqdn. Leader George C. Unwin. D.F.M. who informed me that 84 Sqdn  was on a three month detachment to R.A.F. Tengah from Habbaniya in Iraq and would shortly be returning to the their Middle East base, also the Sqdn. no longer had Mosquito aircraft but had gone 'upmarket' onto the Bristol Brigand.

This was quite a shock for me as I had completed a three month course at 204 A.F.S. (Advanced Flying School) from January to March 1950 at R.A.F. Brize Norton followed by a three month course at No: 228 O.C.U. (Operational Conversion Unit) at  RA.F. Leeming.  Both courses  on the Mosquito MKVI,  carrying out low level flying over the Fens, Norfolk Broads area and Scotland, together with rocketry practise.  At the end of this course we were asked where we would like to be posted and the type of aircraft we would most like to fly in.  The Mosquito being my choice together with an overseas posting. I spent the rest of that day (Friday) wandering around the airfield, getting my arrival 'chitty' signed by the various departments and became officially one of Tengah's personnel.

Early the next day which was Saturday June 24th 1950, also 'Mid-summer Day' I had my first up-close look at a Bristol Brigand.  The outside colour of the aircraft was black underneath with a dark sea grey top, both colours faded due to the heat and humidity, so they looked rather drab.The access/escape door was beneath the belly situated two metres back from the rear edge of the cockpit.  This door being approximately 1.2 metres long x 80cms wide hinged down at the front with three stepping  points on the inside of the door and provision to pull it up once inside and facing forward were 2- armour plated hinged doors over the rear spar opening up to the cockpit which had 2 hinged down padded seats complete with back rests along the one side for the signaller and navigator and on the opposite side a narrow table above which was housed the radio and radar. (B A.B's  and Rebbecca sets.)   At the rear of the cockpit in the clear view canopy was a 'slide up' panel where the gun would have been, the back of his seat being armour plated  originally. 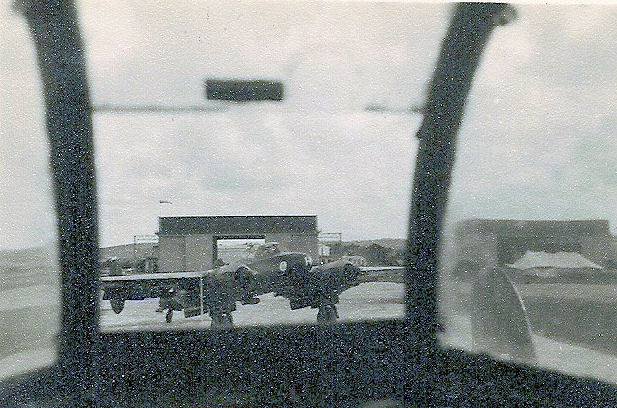 At the front end of the cockpit was the pilots position, the back of his seat being armour plated and hinged to fall backwards and downwards to enable 'access' for the pilot to climb over his seat to enter his domain.  Across the back of the seat there was a seat release cable  complete with a locking pin each side.  The navigator had to ensure that these pins were fully engaged from behind prior to taking off. 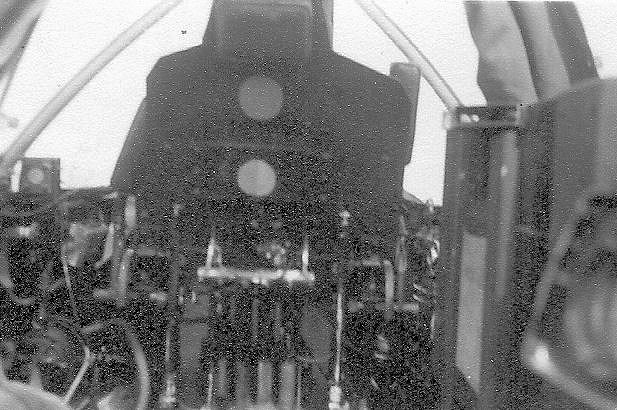 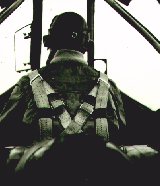 In the event of the pilot flying too low the navigator would pull this cable, the seat would then move swiftly backwards to the flat position whilst the driver would hang onto and pull back on the controls with extra height being swiftly attained. !!!!

Looking at a Brigand during take-off was not a particularly pretty sight since the aircraft seems to take an attitude of not really wanting to get airborne and appears  to take off in a kind of flat manner.  It looks much more like an aircraft once airborne which can be accomplished at between 95-100 knots at all loads and with the flaps set to the max-lift position.  It was important that once lined up on the runway for take-off the tail wheel was locked otherwise the aircraft would waltz along to the amusement of on-lookers and Air Traffic Control. 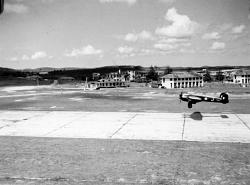 O.K. - So I had looked over a Bristol Brigand and had not been particularly impressed.  Next at  0950 hrs that Saturday morning I was required to carry out a 50 minute airtest in RH823 with Alan Limbert. The engine noise was very loud and in the cockpit once the outside aluminium coloured cock-pit  cover was removed the temperature  was close to 140 degrees with the sun beating down on you.  We wore thin grey tropical issue flying suits and light weight helmets.  We kept the rear cockpit window open whilst airborne which helped to cool down the  inside of the cockpit.

After the landing, we were for the remainder of the weekend on 'stand down' so I got together with some of the Sqdn 'boys' and we went into Singapore - which at that time was a Town.  We made for the 'Services Union Jack Club' for lunch and there at one of the tables were the familiar faces of Sid Haylor and Peter Weston, each tucking into a large helping of 'Indian Beef  Curry'.  I had up until that time never tried a beef curry, but the sheer enjoyment on Peter's face encouraged me to order the same and from that day on I was sold on 'curries'.  Peter and Sid were with 45 Sqdn. also flying Brigands at R.A.F. Tengah. 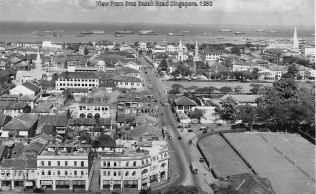