January 1951 gave us a spell of exceptionally bad weather, lots of dense Cumulo Nimbus clouds giving us bad flying conditions, so at times we had to fly below the cloud base and along the coast turning in to Singapore Island at the last minute. Over 2ft of rain fell during the month with thunderstorms occurring most afternoons around 4pm.

Between our aircrew accommodation and our Mess there was a 6ft deep and very wide monsoon drain which would be empty when the storms started but overflowing within 10 minutes. The fuse box in the mess was blown off the wall but replaced in the same position for it to happen again. The following year during the monsoon period , on 12th January I flew from Tengah to Butterworth for 2 weeks 'rest' at Tanjong Bunga on Penang Island (See photo's). 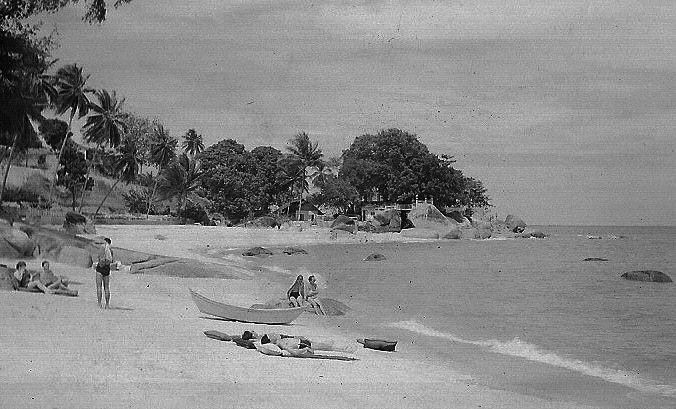 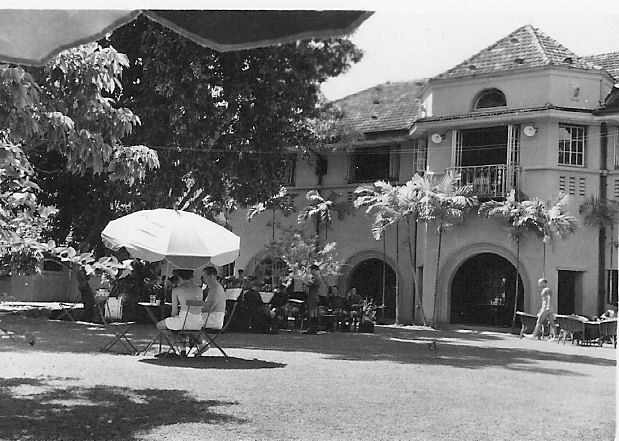 At the beginning of the year we encountered yet another problem for theBristol Brigands when on January 11th Sgt. Pilot Sidney Hayler (Peter Weston's best man at his Wedding on January 9th) together with his crew were flying in Brigand VS838 of 45 Sqdn. They were flying as No: 3 in a formation of three Brigands and were tasked with flying an anti-bandit strike in the Cameron Highlands. After undertaking the first attack on the target Sgt. Haylors aircraft was seen by other members of the formation to be emitting puffs of smoke from the trailing edge of the mainplane. the aircraft climbed to approximately 1000ft during which the smoke continued and parts of the aircraft were seen to break off. The flight commander instructed Sgt. Hayler to bale out. On reaching the peak of the climb, a parachute was seen to open and descend to the ground. the aircraft then went into a dive and subsequently struck a hill and burst into flames.

The loss of Sgt Kent's aircraft , again from No. 45 Sqdn was in virtually identical circumstances. On February 15th 1951 Sgt. Kent and his crew were flying Brigand VS859 tasked with undertaking an anti-bandit strike by three aircraft on the South Johol Rubber Estate. After bomb and rocket attacks Sgt. Kent commenced a cannon attack firing short bursts then turning for a second attack. On pulling out of his dive it was observed by other crews that the normal smoke associated with cannon fire, continued to issue under the fuselage. This thickened, and small spurts of flame followed by pieces of fuselage were seen to fly away. Again the formation leader told the crew to bale out. At about 1300 ft the aircraft levelled out and then went into a steep dive, crashing into a hillside.

It was subsequently decided that both of the incidents had been caused by high explosive ammunition detonating prematurely, possibly due to bad storage. As a direct result of the losses only ball cartridge ammunition was carried for the 20mm cannons.

Brigand RH823 was returned to us during February after its accident in August 1950. It carried out three sorties before becoming unserviceable due to hydraulic failure.

Operation 'Stymie' was carried out in early February with the initial attacks being carried out by the silver coloured Lincolns of No: 1 Royal Australian Air Force also based at Tengah, followed by Brigands of 45 and 84 Sqdn's. the 'Kota Tiungii' area in Johore Baru being attacked for four days.

Two new replacement Brigands (RH786 and VS869) arrived during April.

June was yet again a tragic month for our Brigand Sqdn's, on 1st June I got airborne at 0945 hrs to carry out a couple of radar (BABS) let down, one single engine overshoot followed by a single engine landing followed by One Q.G.H., a practise May Day Call and an Assimilated Instrument flying exercise lasting a total of 2 hours. Towards the completion of this training exercise we were called up on the RT. and asked to fly to the undershoot area of the runway at Tengah to 'recce' the area where Brigand VS869 had just crashed and burst into flames. We carried out a few tight turns at low level over the burning wreckage but it seemed pretty obvious that there were to be no survivors. the aircraft was making a practice single engine approach and crashed in the undershoot area, immediately catching fire. According to Pilots Notes, the turn into wind should be made at about 130 knots, then airspeed being reduced progressively so that the airfield boundary in crossed at 95 knots for light loading (30,000 lbs).

I understand that the landing is straight forward provided that power is not reduced rapidly in the final stages of approach, otherwise the rate of descent becomes excessive.

From June 1st until 19th I flew 15 airstrikes. During that time two Brigands from 84 Sqdn and one from 45 Sqdn had crashed with fatalities, two of which had had their engines shear out.

Anyone who has read Peter Weston's autobiography will have read of the loss of 45 Sqdn Brigand VS857 (08-K) in Kranji Creek on 15th June 1951. Peter had a miraculous escape, his chances of survival were nil and yet not only did he survive, he also saved the life of his pilot, our friend and a very nice chap Allan Martin.

The cause of the crash was that one prop blade had sheared off (on examination the outline of a small nut was found two thirds up from the tip of the prop blade where it had sheared off). the resulting vibration had caused the engine to tear away from its mountings. 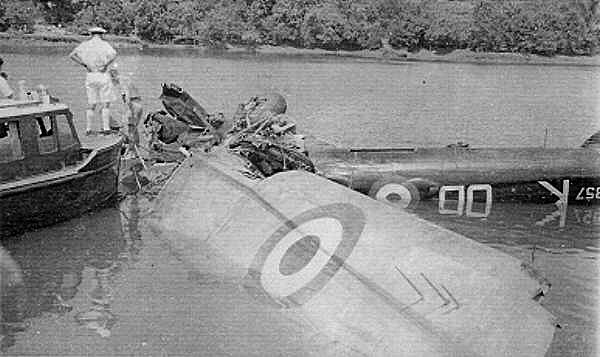 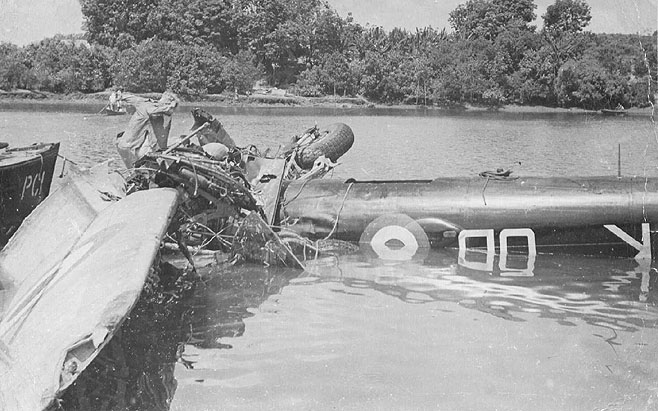 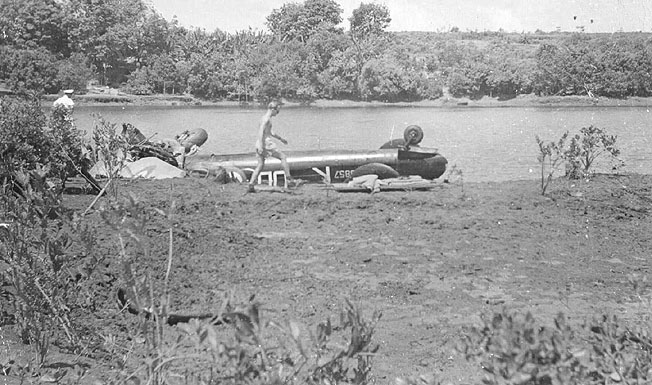 On June 19th we were returning from a strike in the Labis area, when we heard a pilot from our Sqdn call up to Tengah tower informing them he had severe engine vibration. Our C.O. Sqdn. Leader G.C. Unwin who was also returning from a strike, told the pilot to nurse the engine and if the vibration got worse to feather the props. The Brigand was RH811. As he came round into Tengah circuit at around 500ft and lightly increased the revs on the faulty engine, it tore itself off its mountings. The Pilot managed to parachute out of the aircraft but his crew member did not get out. The Brigand crashed near Tengah married quarters and burnt itself out. The cause was found to be that the ring which held the blade onto the prop mechanism sheared in half.

So by the afternoon of 19th June 1951 all Brigands were grounded and later both propellers and engines were restricted in the number of hours they could be used. In the case of props 400 hours

Hereafter the number of crew a Brigand carried was limited to two, i.e., Pilot and Navigator/Signaller and for a while the clip on parachute was replaced with the type used by the paratroopers. A large contraption that had a habit of opening up in the cockpit for no apparent reason.

Whilst all Brigands were grounded I was attached to No: 52 Sqdn (Dakota's) . at Changi flying out to Saigon, Tourane and Kai-Tak (Hong Kong).