Question: How to release your bombs to drop accurately on target without a bomb site?  30 degree dive bombing was practised using 11.lb practice bombs (See photo) but the results proved to be very much trial and error.  Later the pilots discovered that the only datum point which could be used for aiming was the windscreen de-icer delivery nozzle, used for 20 degree dives.  When flying below the clouds straight and level bombing had to be deployed.  The Pilot then would allow the target to go under the nose, count three and press the bomb release control.  How sophisticated!

Not one Bristol Brigand was serviceable by the end of July 1949.   On 16th August the Sqdn's Bristol Buckmaster arrived.

On 16th September 1949.  Sqdn. Leader George. C. Unwin. D.F.M. took over command of 84 Sqdn. from Sqdn. Leader S.G. Nunn who was 'tour expired', and during the month 100 flying hours had been logged, a welcome improvement.

During November two aircraft were found to be u/s with cracks in the skin on the underside of the mainplane and wrinkles on the upper surfaces so a maximum amount of  '3 G' was imposed  preventing dive bombing.   The two aircraft with surface wrinkling returned to the U.K. for inspection by B.A.C.  The cracks in the wings of Brigand RH818 were pasted over with brown paper and in the event that whilst in flight, tears were noticed in the paper, the Pilot was to ground the aircraft  - 'As Soon As Possible..

During December 1949 only limited flying was allowed, due to restrictions of all aircraft showing signs of wrinkling on the upper surfaces to straight and level flying.  Later the aircraft were allowed to fly up to a Max. of 300 knots and 2'G'.   In early January 1950. B.A.C. reps. arrived and informed the Sqdn. that the results of tests on RH826 showed that it was possible to repair the aircraft on the station should they occur again.

On 9th March 1950, One Brigand RH817 had hydraulic pump failure  (see Illustration ) and could not get the undercarriage to lock down even by using the hand-pump and after cutting a hole in the hydraulic tank using the escape axe and pouring in water and 'pee' ,  all to no avail.  Even after using the built in explosive system which only caused the wheel that was locked down to come back up and the one that was down would not lock so a 'belly landing' was the only option.  The cause of the failure of the explosive system was that a valve had been assembled the wrong way round on its original manufacture. 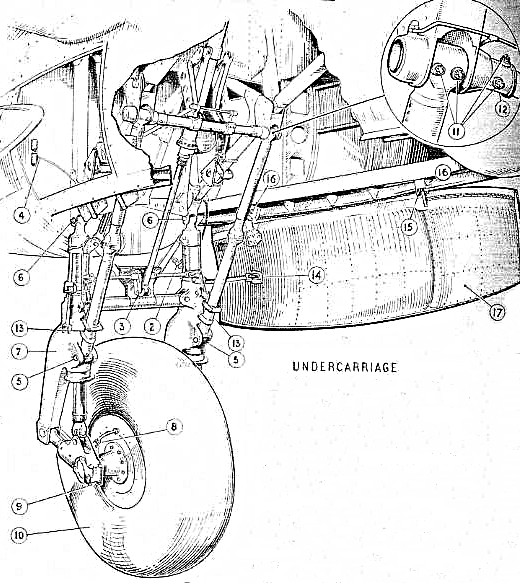